Kvarner has a remarkably long hospitality tradition that dates back to the middle of the 19th century. Take for example Opatija’s tourist tradition, which started in 1844 and was even hailed in March 1884. This was further embedded through the opening of hotel Kvarner, which is the first on the eastern coast of the Adriatic.

As soon as the end 19th century came, lots of bases were established and were specifically meant for tourism in various areas, such as Novi Vinodolski, Krk and Crs, Rab, and Losinj.

It is best known for its genuine hospitality, a quality was developed due to being a long tradition. This quality has then been reflected in the quality of services that almost all tourist operators coming from different generations. Kvarner is also home to many of the world’s rich tourist programs, making it a warm location for visitors across the world. 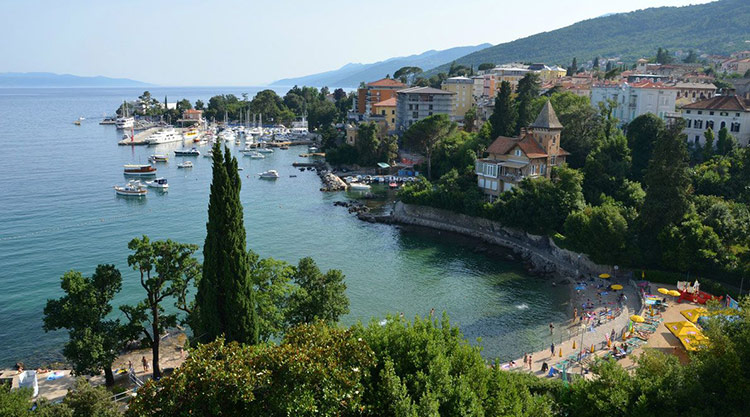 Apart from being a top-notch tourist destination, Kvarner is also known offering a unique aromatherapy experience. This is all thanks to its mild climate, which is usually found in the coast and the many islands. Even more so, the region offers abundance of fresh air coming from the hinterland. This air, in particular, reportedly offers a health benefit. In fact, it is the main reason why many visitors visit the region.

Things to od & places to visit on Kvarner

The same reason can be said why during 1907 Opatiia became second in the number of visitors’ attendance rate. It is mainly because of the mild climate topped with beautiful, aromatic vegetation that the many islands like Lošinj owes its tourist popularity.

If the impact of this self-grown vegetation is to be included in the many beneficial effects on health that sea, air, and sun offer, then it is safe to assume that Kvarner is a must-visit place to experience open-air aromatherapy. And, of course, it is one of the best Mediterranean gardens in the world.

In case you did not know, the region’s titular scampi are considered to the best in the planet.

While not one can really explain this indisputable fact, there are lots of clear differences present. For starters, they are able to be unique and distinguish themselves through their light red color. They also come with thin shell. But as far as experts are concerned, the secret lies in their peculiarity.

The latter is achieved for the fact that they live in quit shallow sea with lots of sources of drinkable water. As a result, Kvarner’s scampi are not only sweet but also very soft.

One of the Kvarner’s best is definitely the Vrbnička žlahtina. By essence, it is an out of this world wine acquired from the homonymous autochthonous kind of white grapes. These grapes are basically obtained from the mountains of Krk and Vinodol, which was called so because of its native soil.

Rijeka is none other than the administrative and cultural centre of the Primorje-Gorski kotar County. Being deemed the third biggest metro in Croatia, expect it to have a great number of inhabitants. The city is also positioned along the course of Rječina River, as well as nearby several streams.

Rijeka can be seen alongside many abundant confluences and sources. And pretty much like most cities in the planet, it carries with it a symbol of water. There is so much to discover and explore in Rijeka. It is a place worthy of a visit! 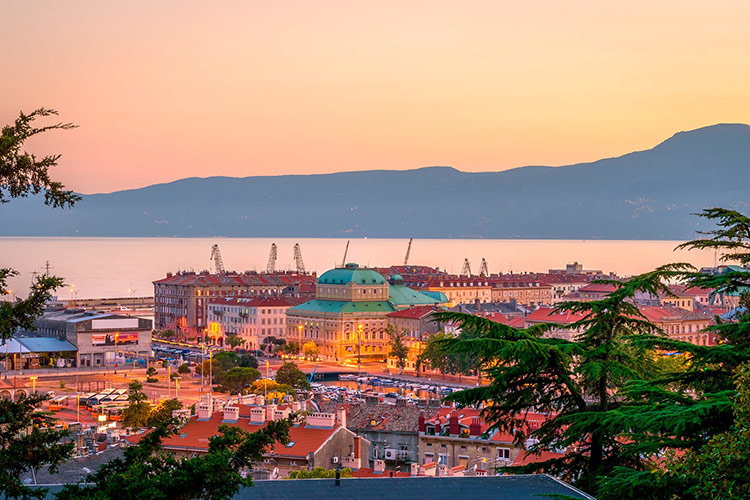 If you are to mention the name of Carolina Belinich in the region, you will be surprised. Why exactly? That is because there is little to zero passer-by who will not paint a smile upon hearing the name. Seriously, though, there is no person in the region who does not know her.

And if you are among the lucky ones, you will get to have the chance of hearing a story about a woman from the region whose actions and character have remained engraved in the memory of her fellow townspeople. Even nowadays, her traits continue to inspire people, despite existing in the 19th century.

Saint Vitus is none other than the patron saint, one that is greatly hailed in the City of Rijeka and in all of the Croatian regions. During the medieval times, the region was called the “Rika svetoga Vida.” In Latin, it is translated to “Terra Fluminis sancti Viti.” By essence, Kvarner is a region packed with diverse stories and a deluge of strong emotions.

Opatija is without a doubt an extraordinary tourist destination. It is situated beneath the Učka Mountain and comes with the longest practice and tradition of tourism in Croatia. Constructed at the birth of the 20th century, the region has remained in total harmony with nature and it has continued to deliver such quality up until the present day.

You will appreciate it for its well-maintained public gardens and the countless villas, cafes, and hotels. 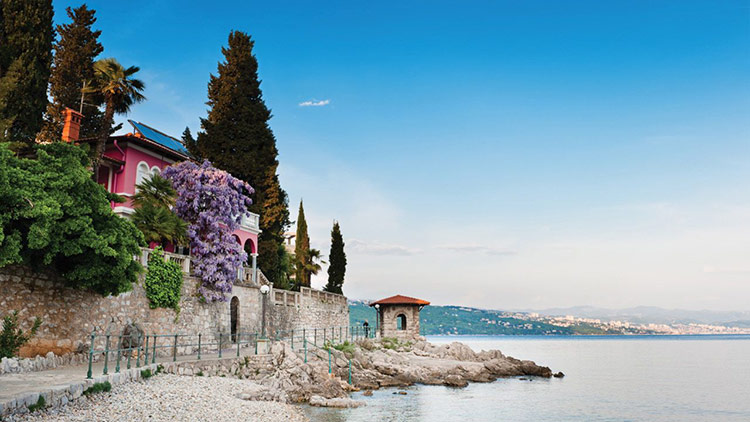 There is also the illuminated 12-km-long coastal promenade and lots of opportunities for shopping. Moreover, the region is home to multiple events and shorter journeys or all-day excursions. All of these are reasons why the region is a very attractive tourist destination – and it does not need to be accessible any time of the year.

The first on the list is the horticultural monument of Opatija in Angiolina Park. It comes with plants brought from Australia, the Far East, South America, and other locations across the globe. In fact, it is also packed with lots of Japanese camelia or Camellia japonica, which is basically the symbol of Opatija.

Then there is the Villa Angiolina partnered with the The Croatian Museum of Tourism. Apart from the two, visitors must also give the Juraj Šporer Arts Pavilion a visit, especially since it offers a variety of exhibitions located next to Abbey. You can also strong around the Lungomare. It refers to the path that stretches from Volosko and all the way to Lovran.

Mind you, its total length is roughly 12 km. Also, make sure not to forget the walking path “Carmen Silva,” which is just above Opatija and its approximately 3 km long. If you are a true hiker, it is imperative to know that there are lots of paths leading to peak Vojak, the one located on Učka mountain.

Senj offers a wide variety of multiple accommodations, all of which are perfect for either holidaymakers or business travelers. Your wallet will not even break with the prices of stay, including other costs such as transportation and living. That is because they all are every affordable, especially when compared to other regions or places on the Adriatic coast.

The city of Senj is basically situated on the said coast and is just under the titular mountain of Velebit. Furthermore, it is deemed to be the oldest settlement, at least, on the Northern Adriatic. In fact, its first settlement was the main establishment of the Illyrian tribe called Japodi, who were positioned themselves on nearby Kuk hill. 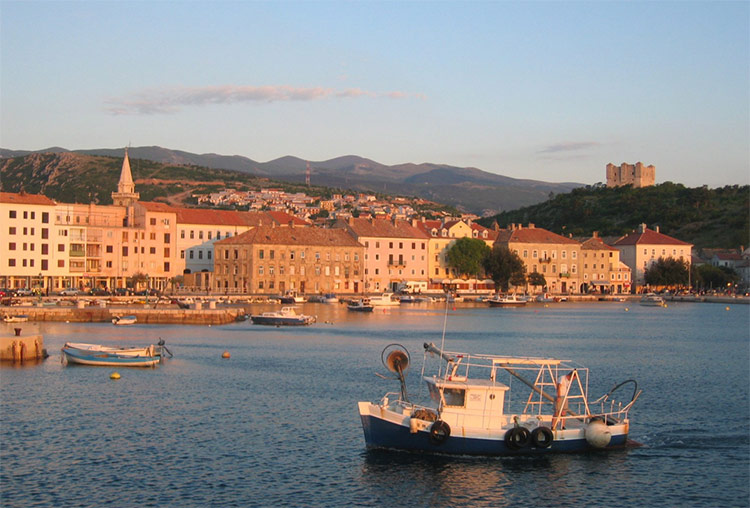 The metro is also known for being a huge town, one that is betweent the cities of Zadar and Rijeka.

Apart from that, it is also hailed as a giant tourism center. Not only is it surrounded by a crystal clear sea, but it is also close to lots of tourist attractions. The region is also said to be next to a dense forest. These qualities make the region the go-to spot for business travelers and even booth tourists.

The city is definitely not among those places that are popular amongst visitors and/or tourist, especially those who are fond of taking trips to Croatia. But because of its long history and beautiful beaches, it has the capability of leaving your breathless.

You can visit the region if you want to experience what summer days should be. Or perhaps you are looking for nights packed with lots of things to do, as well as events and performances to see and enjoy.

If these pique your interest, then make sure you include Senj on your must-visit places list. With its popularity, there is no doubt it will become a big tourist hotspot in all of Croatia.

A small coastal town, Crikvenica is a popular place in the region of Kvarner. And alongside Novi Vinodolski, it is none other than the center of the riviera. It is also home to the oldest material human remains, which is said to be a possession of the Illyrian tribe.

The history of the region is deeply rooted to the nearby Vinodol valley. This valley, in particular, is where settlements gradually transferred to the coast. As such, trade ports were developed and transformed to fishermen’s town. Ultimately, the region became a top tourist destination.

As far as tourism in Crikvenica is concerned, it started blooming at the end of the 19th century. During the peak of 1894, the first ever hotel was established and, eventually, the region was proclaimed a climate place for tourists and/or holidaymakers. 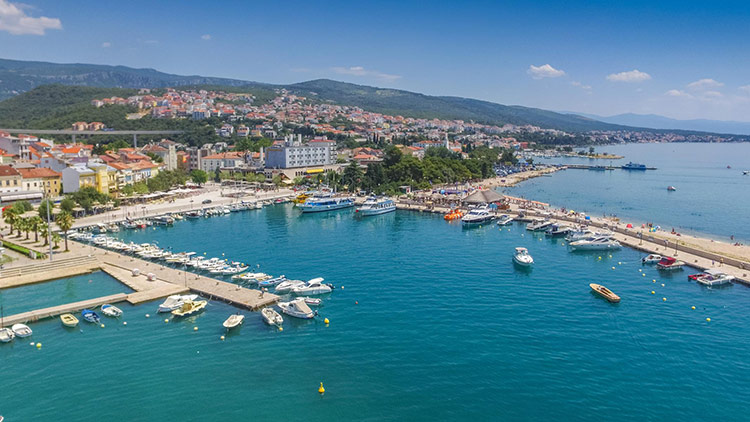 The region is known for its various beaches, such as the public beach called Gradsko kupalište. It is a well-known sandy beach which had obtained the Blue Flag since 1998. Not only are children and adults fond of this beach, as it became a destination for the disabled. It is home to various water sports, from water parachute to water skiing to table tennis to beach volleyball, just to name a few.

What makes these beaches even more interesting is the existence of souvenir shops, fruit booths, bars, and restaurants. In addition, it became a destination for people looking to eat pastry and/or vegetables.

Crni Molo beach, in particular, is a popular location. It is best known for having a shallow bay, thus perfect for kids and playing the titular game called picigin. Balustrada beach, on the other hand, is somehow pebbly and it stretches all the way to the centre of the region. And like the aforementioned, it also boasts a Blue Flag.

There are many types of accommodation in the region of Crikvenica. There are even tons of hotels, each of which differs in terms of categorization. But the best one so far is the four star hotel called Kvarner Palace Hotel, which is located in the very heart of the region. It is a welcome destination indeed!