Being a tourist macro region, North Dalmatia is strategically located in the central area of the Croatian Adriatic. This is particularly in the part from Stari Grad in the northern part to Rogoznica in the south. The region offers some of the most famous tourist destinations, which include Zadar, Sibenik, Vodice, and Primosten.

The region is packed with natural and historical sights, all of which will leave visitors at awe. They are situated in both the hinterland and the coastal areas. When compared to the whole of the Adriatic Sea, North Dalmatia is considered to be the most developed. Plus, it offers a handful of islets, reefs, and islands, just to name a few. 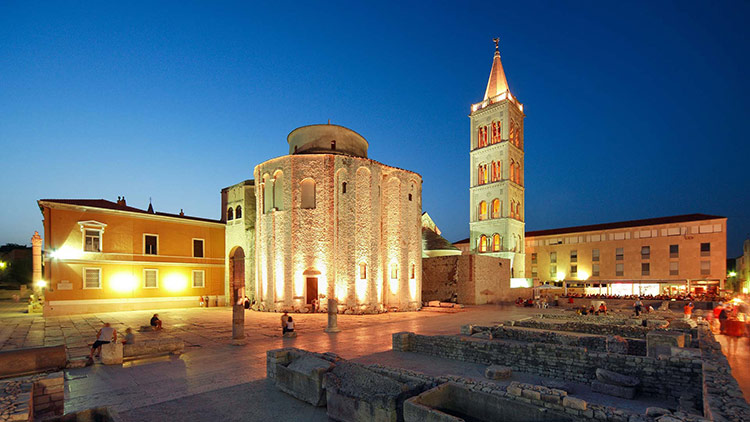 Pag Island, in particular, is deemed to be the largest island in the region. And it is quite popular for saltworks, lace, and cheese. More importantly, tourists go there for its nightlife, which is often celebrated on the beach of Zrce.

In the northern part of the region, tourists can easily enjoy its clear turquoise sea, as well as its ever-famous fertile plains, lakes, and high mountains. What is more is that it has a total of three national parks and at least two nature parks.

Interestingly, North Dalmatia has more to offer than its aesthetic appeal. For starters, it comes with a vibrant and pleasant Mediterranean culture. There are also countless natural attractions, secluded oasis, sandy beaches, and archaeological sites. In addition, the region is known for its rich choice of food, countless opportunities meant for excursions and active holidays, and selected local specialties. More importantly, it has a wide range of accommodation enough to attract visitors in this very part of Croatia.

Why You Should Visit North Dalmatia

North Dalmatia is often overlooked as a holiday destination, which is really a shame. What some people do not know is that it is as lovely as the rest of the Croatian coasts. As mentioned above, it has lots to offer to tourists. It has amazing historic sites in the town of Sibenik and Zadar; resorts of Vodice and Biograd Na Moru are always a welcome destination for holidaymakers; Kornati Islands, on the other hand, are meant for exploration.

The region is set amid the wild beauty of white karstic rock, not to mention the breath-taking azure sea. For yacht lovers, there is no doubt that the Sibenik aquatorium is a paradise, especially since it boasts of more than 240 isles and reef. If you are in for the most popular coral hunters only the Adriatic can offer, then it is time you consider sailing to Zlarin.

If you wish to embrace the idea of experiencing the center of sea sponge harvesting, then you should set Krapanj as your go-to destination. Meanwhile, if you are looking an experience like no other, considering going to the open sea and explore the lovely Kornati Archipelago.

As mentioned above, North Dalmatia offers some of the most tourist destinations. Here they are:

Zadar has been hailed as the capital city of Dalmatia, a title it holds for many centuries. It is a place packed with vast cultural-historical heritage. Take for example the very first Croatian university, which was founded sometime in 1396. There are also the traditional Mediterranean cuisine, the metro of Croatian basketball, and a whole lot more.

Tourists are also encouraged to take a visit to the Zadar cathedral, which is the largest cathedral in the region of North Dalmatia. It is believed to be dedicated to St. Anastasia, who is one of the four patrons of the town. If you are fond of climbing up, try to go to the cathedral tower, so you can witness the beauty of the whole town and its surroundings.

You might want to take a walk at the Zadar promenade (Riva) and relish the most memorable sunset you can ever experience. Believe it or not, there is nothing like this across the world. You will even get to see a new on some nearby islands. 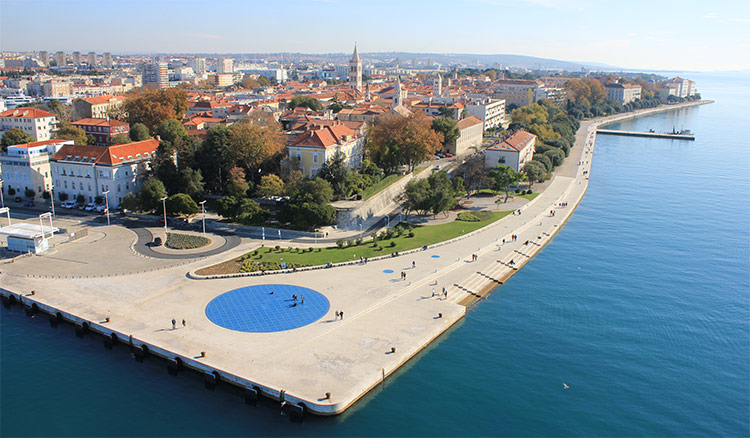 Even the famed director named Alfred Hitchcock said that if one wants to witness the most stunning sunset the world can offer, then it must be from the very spot on Zadar’s sea promenade. The area also consists of several stairs, all of which seem to beautifully descend into the sea.

Right above the canal, you will see some perforated stone stairs. From there, you can treat your ears to sounds coming out as the sea pushes the air.

If talking about a town that successfully combines and showcases natural beauties and famous histories, there is nothing like Sibenik. Nature has given this place a lot of islands and islets, all of which bathed in the bluest of the sea.

A town most often mentioned by Kings for its beauty and magnificent surroundings, it is packed with beautiful nature, rich tradition, and the kind of hospitality that offers you something to do. 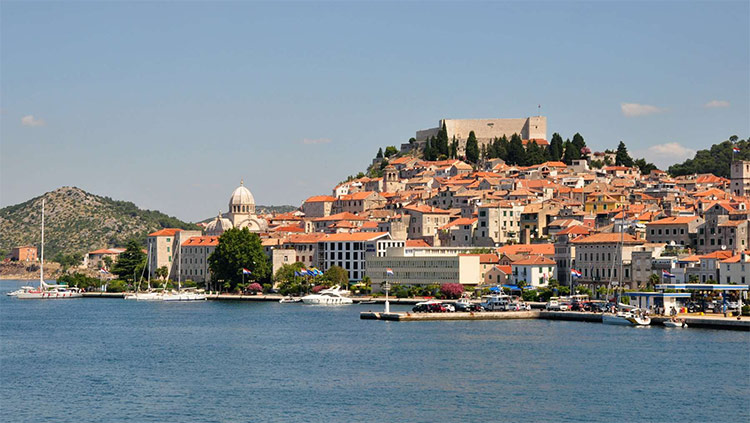 Sibenik vast history begins in the year of 1066, particularly the time of King Petar Kresimer IV’s charter. Up to the infamous World War One, the town was ruled by the likes of Austrians, Hungarians, and Venetians.

The Renaissance, on the other hand, left a noteworthy trace on the face of the town. And St. Jakov cathedral is no secret the most significant among many buildings in the area. Considering the fact that it was purposely built for centuries, one can easily tell the amount of effort and skill invested in erecting this building.

Sibenik’s town hall dates back to the 16th century. Since then, it has been hailed as one of the most beautiful town halls in the region. Mind you, it is well-known for its postcards, which has been a common them since time immemorial. Also, it is said to represent one of the highest achievements when talking about urbanism in the region.

This is simply because it was completed only ten years following the existence of the aforementioned cathedral.

A place famous for being a tourist center, Vodice has lots to offer. Tourists are encouraged to take a walk through the metro center and, at the same time, visit some of the well-known archaeological sites. The town also offers at least two archaic churches. The most popular one is the small church named St. Cross, which was founded sometime in 1402. It was specifically dedicated to St. Cross, thus the name. The parish church once had a graveyard on its surroundings.

The above-mentioned church is built to display a Gothic style. The latter is basically a typical example of the so-called rural sacral architecture. 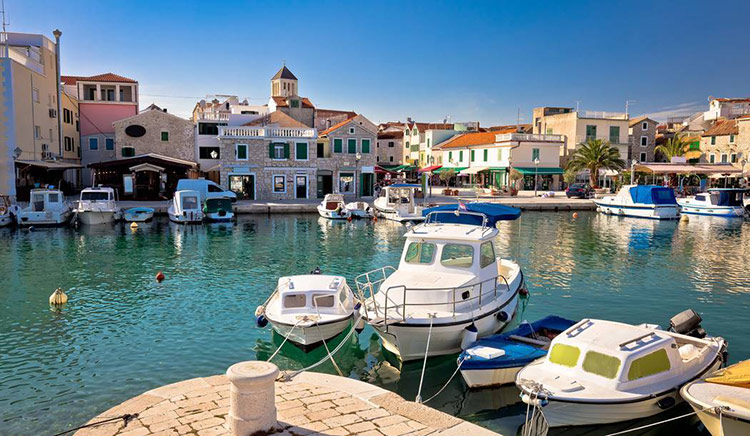 Another worth seeing in Vodice is the Museum of the Navy Tradition and Aquarium. Tourists should also visit the Memorial center called Faust Vrancic, which is located in the Prvic Luka.

It is said to be roughly 10 minutes by boat when coming from the center of the town. Doing so will help people learn more about the ingenuity and greatness of the great Croatian renaissance scientist.

Vrancic was born in Sibenik during the year of 1551. During his time, he gained an education on basic humanities. His masterwork called Machinae Novae offered around 49 massive pictures, all of which beautifully depicted about 56 varied machines, technical concepts, and devices. One of the illustrations refers to a sketch that seems to depict a parachute coined as Homo Volans or The Flying Man.

Apart from the aforementioned, Sibenik also comes with a handful of restaurants. They all offer a quality gastronomic experience – and it does not care whether you are a mean or fish lover. If you are more into specialized fish dishes, then you should try “Rico” and “Burin.” If you want to try the town’s most famous steak house, pay a visit to Guste, which is located in the town center.

Primošten, which is known for being a small picturesque town, is located between Trogir and Sibenik. It is more specifically situated in the central area of the Adriatic coast. The town is surrounded not only by wonderful and beautiful sites to explore but as well as seven other islets.

During the Turkish invasions, which took place sometime in 1542, the settlement found on the islet where the Primosten of today is located, was said to have been protected by towers and walls. These infrastructures were meant to prevent attacks coming from invaders.

Even more so, there was a draw bridge specifically built to connect it straight to the mainland. When the Turks decided to retreat, the said bridge was eventually replaced by the causeway. As soon as 1564 entered, the settlement was christened as Primošten, which is basically after the Croatian verb called “primostiti.” The latter refers to the meaning “bridge over.” 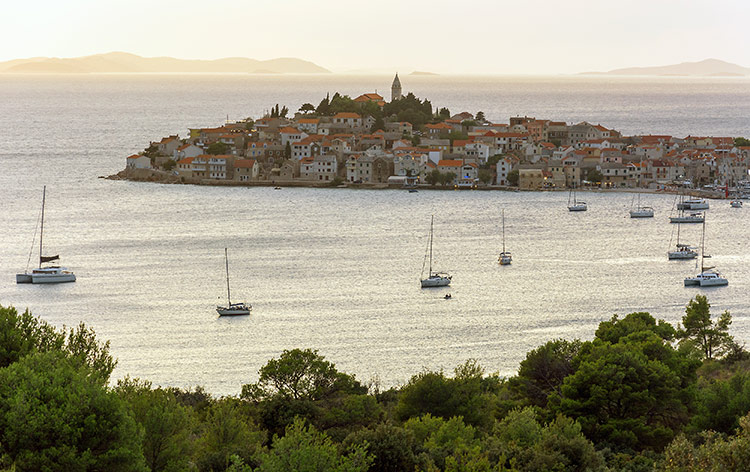 The place has been successful in preserving its Mediterranean atmosphere, which is definitely a welcoming asset to many tourists. The same thing can be said for all the features depicting a medieval Mediterranean fishing town. If you are unsure of these qualities, you can check out the many narrow streets as well as the strategically compacted houses. All of them can serve as evidence, which, in turn, give meaning to the old town core.

Tourists are encouraged to pay a visit and/or stroll to some of the town’s historical sites. Perhaps the most popular among them is none other than the parish church St. Juraj (St. George), which was said to have been built sometime in 1485. It was particularly erected on the utmost point of the said island. Next to it is the St. Roko church, which was built in 1680. It is viewed as a valuable cultural monument. Last but certainly not least is the image of Our Lady of Loret, as well as the Church of Our Lady of Grace.

Primošten is known for its archaic and beautiful vineyards. Mind you, all of them are hailed as a UNESCO World Heritage Site. In fact, there is a photo of these vineyards of the town and it used to hang in the UN center located in New York.

People should not also miss out on the experience of trying the local Babich wines. In addition, the town is famous for its traditional donkey race that takes place there every summer.